Borah Peak is a peak in Challis National Forest, ID.

Mount Borah, as it is called by locals, is Idaho’s highest peak at 12,662 ft. It is also the highpoint of the Lost River Range and Custer County. The mountain also qualifies as one of the 57 ultra-prominence peaks in the lower 48 with over 5,000 ft. of prominence. Borah stands over 400 ft. higher than any other peak in Idaho and is highly visible from any direction.

A rare event occurred in 1983 when a large earthquake struck the area, raising Borah’s elevation by 7 ft. from 12,655 ft. to it’s current height. You can still see the fault scarp below the peak along the eastern side of the Big Lost River Valley.

Because of it’s status as a state highpoint, Borah is climbed VERY often during the summer season and in recent years crowding has become a problem, especially on weekends. There is an established, signed trailhead and the standard route up the peak is the Southwest Ridge. The route is pretty straightforward except for a knife-edge portion called Chickenout Ridge where many people turn around because of the exposure. Some years there is also a snow bridge that must be crossed after a 20 ft. down climb at the end of Chickenout. When the route is snow covered it is a much more difficult mountaineering route and should not be attempted by inexperienced climbers. It is important to stay on TOP of the ridge and not venture too far down either side.

There are several alternate routes up the mountain, most notably the North Face route which is probably Idaho’s best snow/ice route. It is very steep and should only be attempted by those with adequate mountaineering experience.

Please refrain from throwing rocks or other objects, or hitting golf balls from the summit. These objects could potentially injure or kill those attempting other routes. 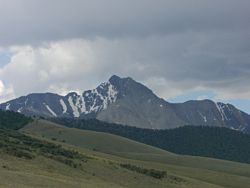 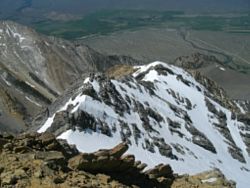 On the Web
On Wikipedia

Borah Peak (also known as Mount Borah or Beauty Peak) is the highest mountain in the U.S. state of Idaho and one of the most prominent peaks in the contiguous states. It is located in the central section of the Lost River Range, within the Challis National Forest in eastern Custer County. The mountain was nameless until it was discovered to be higher than Hyndman Peak, previously regarded as the state's highest point. In February 1934, the U.S. Geological Survey named it for William Borah, the prominent senior U.S. Senator from Idaho, who had served for nearly 27 years at the time and was dean of the Senate. An outspoken isolationist, the "Lion of Idaho" ran for president two years later in 1936, but did not win the Republican nomination, and died in office in 1940.

Read more on Wikipedia
Contribute
Edit Page
Location
Get Driving Directions
Sign In to see coordinates.
Legal Notice: Place locations (i.e. coordinates) are subject to the Natural Atlas Terms of Use. (a) We do our best to validate and correct inaccuracies, but we cannot be responsible for their use or effects. (b) Scraping is prohibited.
Page last updated July 26, 2017
PrintiPhone App