Schooner Head Overlook is an observation point in Acadia National Park, ME. 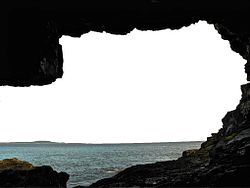 At Schooner Head Overlook is a narrow paved path which leads to high cliffs with great ocean views.  Where the path arrives at the cliffs, you are standing on the roof of an ancient sea cave known as Anemone Cave.  This cave was abandoned by the Park Service and removed from newer maps.  The cave can only be entered at low tide and people in the past have become trapped and drown in the cave.  The sea cave was at one time a main attraction in Acadia National Park.

Near Trail
Schooner Head Path
Trail
Contribute
Edit Page
Location
Get Driving Directions
Sign In to see coordinates.
Legal Notice: Place locations (i.e. coordinates) are subject to the Natural Atlas Terms of Use. (a) We do our best to validate and correct inaccuracies, but we cannot be responsible for their use or effects. (b) Scraping is prohibited.
Page last updated January 23, 2018
PrintiPhone App