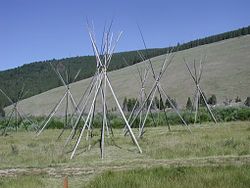 On Route
Nez Perce Camp Interpretive Trail
Interpretive Trail
Contribute
Edit Page
Location
Get Driving Directions
Sign In to see coordinates.
Legal Notice: Place locations (i.e. coordinates) are subject to the Natural Atlas Terms of Use. (a) We do our best to validate and correct inaccuracies, but we cannot be responsible for their use or effects. (b) Scraping is prohibited.
Page last updated December 21, 2017
PrintiPhone App