Hill 88 is a great dog-friendly hike packed with relics of a once-heavily-fortified bay in the World War II days. The popular loop in the Marin Headlands and Golden Gate National Recreation Area takes roughly 2½ hours to complete is about 5.7 miles with about 1,000 feet of elevation gain. Old concrete bunkers (big and small) dot the hillside and an old radar station makes a fantastic destination at the hill’s crest. 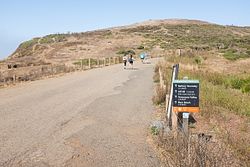 Rodeo Beach is a popular dog beach and surf spot, but it’s also the starting point for the hike to the summit of Hill 88. The trail begins as a paved road that gently climbs until it reaches Battery Townsley. Before that, you’ll pass an old bunker on the left that’s locked up. The narrower, dirt Coastal Trail also branches off and ultimately meets back up to the road. You’ll likely hear the distant sounds of a metal buoy clinking in the waves off Tennessee Point. 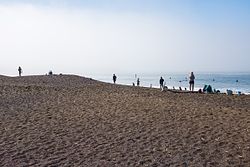 Along the way is Battery Townsley – a WWII-era artillery battery that once was home to a 16” gun that was positioned to provide harbor defense. It was never used in battle, but was fired as part of test and training exercises. The original gun is no longer at the site, but a comparable one on display at Battery Townsley has its own historical significance. The barrel that’s now lying down for visitors to see was once mounted on the USS Missouri – a ship in the Pacific Fleet, present during the Japanese surrender in Tokyo Bay.

Battery Townsley and Battery Davis were home to 16" guns that provided defense for the San Francisco Bay during World War II. The barrel sitting at Battery Townsley today was originally mounted on the USS Missouri, which was part of the fleet at the Japanese surrender in Tokyo Bay. 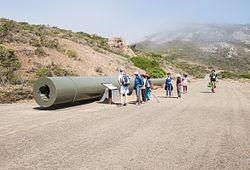 The route to the summit is a straightforward one. After climbing some stone steps (with steel cable as a hand rail), you’ll shortly reach a bunker where the trail forks. The route to the left is a dirt trail that passes by some ruins, and the route to the right is a gentler paved path. The dirt option is more of a ridge-top experience, so the views are more panoramic. 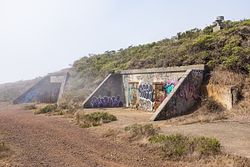 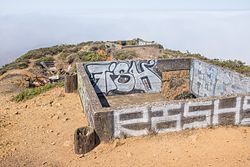 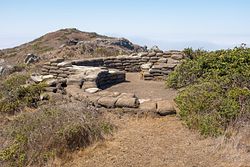 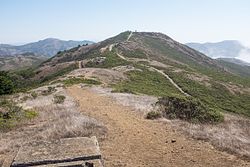 At the summit is an old radar station, helipad, and a few other gutted buildings that are now heavily graffitied. Chainlink fence encompasses the area, but it’s open to the public.  On the righthand side after entering is a concrete pad that looks over the coast, where the Golden Gate Bridge, Sutro Tower, and the new Salesforce Tower in San Francisco make an appearance on the skyline. 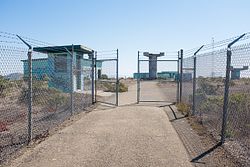 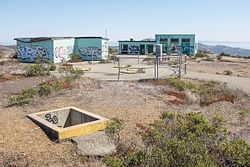 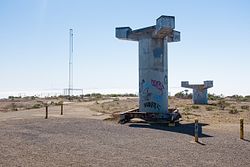 There’s not much shade on the hike, but the old building ruins provide some shelter and make a nice spot to cool off on days when the fog isn’t enough.

It’s entirely possible to return back down the same trail to Rodeo Beach, but for a change of scenery it’s nice to loop back via Miwok Trail. To get to the Miwok Trail from the summit of Hill 88, hike back down the way you came and then fork right at the trail junction after a thousand feet or so that you should have passed on the way to the summit. It’s clearly marked. The trail skirts the hillside until it reaches Miwok, a bike-friendly fire road. 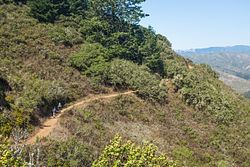 Especially on weekends, there are many mountain bikers climbing up the trail and also traveling down it with speed – so if you opt for this route, keep an ear out for the sound of bikes from behind. Dogs are required to be on leash for the entire hike, but for this section it is most imperative.

Follow the road down and stay right until Rodeo Lagoon. From there it’s a short walk along the road back to the parking lot.