Cinder Cone That Erupted
Less Than 1000 Years Ago 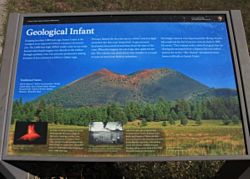 On the Web
On Wikipedia

Sunset Crater is a cinder cone located north of Flagstaff in U.S. State of Arizona. The crater is within the Sunset Crater Volcano National Monument. Sunset Crater is the youngest in a string of volcanoes (the San Francisco volcanic field) that is related to the nearby San Francisco Peaks. The date of the eruptions that formed the 340-meter-high cone (1,120 ft) was initially derived from tree-ring dates, suggesting the eruption began between the growing seasons of A.D. 1064–1065. However, more recent geologic and archaeological evidence places the eruption around A.D. 1085. The largest vent of the eruption, Sunset Crater itself, was the source of the Bonito and Kana-a lava flows that extended about 2.5 kilometers (1.6 mi) NW and 9.6 kilometers (6 mi) NE, respectively. Additional vents…

Read more on Wikipedia
Contribute
Edit Page
Location
Get Driving Directions
Sign In to see coordinates.
Legal Notice: Place locations (i.e. coordinates) are subject to the Natural Atlas Terms of Use. (a) We do our best to validate and correct inaccuracies, but we cannot be responsible for their use or effects. (b) Scraping is prohibited.
Page last updated July 25, 2017
PrintiPhone App