Cabin Ruins are sensitive in nature and deserve the utmost respect. Please help preserve the area for future generations. 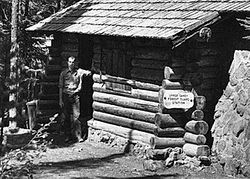 On the Web
National Register of Historic Places
On Wikipedia

The Upper Sandy Guard Station Cabin is a log and stone building built in 1935. It was funded as part of the Federal work relief Emergency Relief Appropriations Act of that year, and also by funds from the City of Portland, Oregon.It is "an exceptional expression of a 'rugged' Rustic style U.S. Forest Service building", and is the only cabin constructed of its particular design. Out of 700 Forest Service administration buildings built in Oregon and Washington during 1933-1942, it is the only one built with both stone and logs as principal materials.It was built in 1935 to house an administrative guard who was to prevent intrusions into the area, part of the city of Portland's water supply area. It is located in what is now Mt. Hood National Forest, about 5 miles from Government Camp in…

Read more on Wikipedia
Near Trails
Pacific Crest Trail
Trail
Timberline Trail #600
Trail
PCT Section G (OR) #600
Trail
Ramona Falls Trail #797
Trail
Contribute
Edit Page
Location
Get Driving Directions
Sign In to see coordinates.
Legal Notice: Place locations (i.e. coordinates) are subject to the Natural Atlas Terms of Use. (a) We do our best to validate and correct inaccuracies, but we cannot be responsible for their use or effects. (b) Scraping is prohibited.
Page last updated October 7, 2019
PrintiPhone App