Alvah Unthank Grave is a grave in Wyoming.

At this gravesite overlooking the North Platte River, Alvah H. Unthank was buried in 1850. Alvah was on his way to the California goldfields via the  Oregon-California Trail when he became suddenly sick with Cholera. A week before his death he carved his name at nearby Register Cliff.

The gravesite itself is located on private land and the landowner refuses to allow access (source), but there is a roadside historical marker and interpretive sign a short distance from the grave. 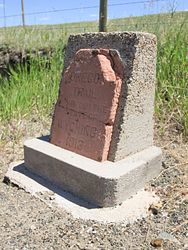